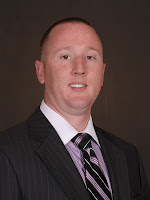 Bradford Backlund of the Leavitt Group was recently recognized by the National Association of Health Underwriters (NAHU) for distinguished service as the Membership Chair of the Western U.S. region. Bradford’s region had the highest membership retention and growth rates compared to the other seven regions across the country. Bradford accepted an award for his service from the association at their national convention in Las Vegas, Nevada.

Bradford Backlund has been a successful commercial insurance agent for the Leavitt Group’s Flanigan-Leavitt Insurance Agency located in Reno, Nevada, for four years.