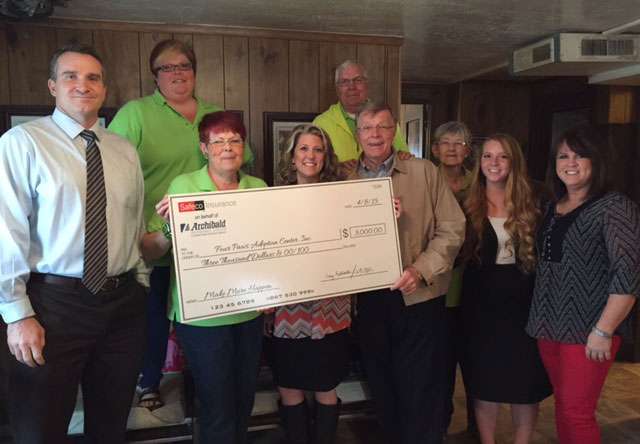 Archibald Insurance Center, a Leavitt Group affiliate, recently helped Four Paws Pet Adoptions win second place in the Safeco Insurance “Make More Happen” spring contest. By volunteering for the no-kill animal rescue, the agency qualified the charity to participate, which resulted in a total donation of $8,500 this year.  The volunteer-and-charity team received over 9,000 public votes during the online contest.

“We were very excited,” said Malorie Warner, agent for Archibald Insurance Center. “It was a very close race, and we were up against some heavy hitters.”

The agency was also recognized earlier this year by Safeco Insurance for their volunteer work at Four Paws Pet Adoptions.

“Faith, Rita, Malorie, and Amanda from our office spent time volunteering at Four Paws Adoption Center,” said Gary Archibald, Archibald Insurance Center co-owner. “They had a great time and learned a lot from the great people that love and care for all the animals.”