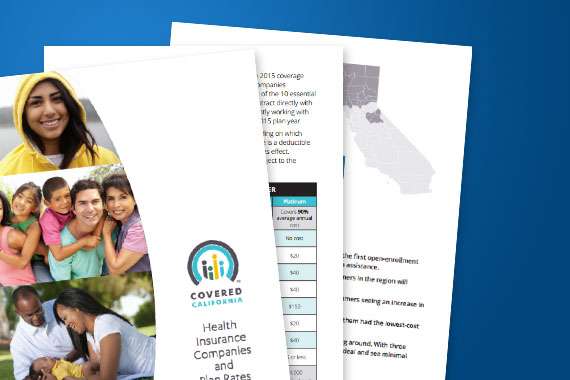 The 2015 rates are tentative and subject to an independent reasonability review by the state’s regulators.  The California Department of Managed Health Care will review the rates of nine carriers and the California Department of Insurance will review the rates of one.  The rates will be released to the public once they are approved.

Health Insurers in the 2015 Exchange

The current list of insurers is for comprehensive individual health policies only, including children’s dental coverage (as required by PPACA). Covered California will later announce adult and family dental options available through Covered California, along with health insurance options for small businesses.

Cost and Coverage for Enrollees in 2015

According to the Covered California Press Release, 90% of consumers currently enrolled in health insurance plans through Covered California are receiving federal subsidies to help reduce their overall costs. In most areas of the state, the amount of subsidy that individuals receive will either increase or remain very close to 2014 subsidy amounts. This means that for many consumers, any increase in premium will be offset by an increase in subsidy.

The Press Release also noted that in response to customer feedback, some health insurance plans will offer expanded provider networks (increasing the number of doctors available to enrollees).  During the open enrollment period for 2015, current enrollees can either stay with their current plan or change to another option available in their region (perhaps to a lower-priced option if premiums for their current plan increase or if another network better suits their needs).

For Additional Information on 2015 Individual Policies in the Exchange

For more details on the plans in specific pricing regions, visit www.CoveredCA.com/PDFs/CC-health-plans-booklet-2015.pdf.   The website also offers a 2015 Shop and Compare Tool, at www.CoveredCA.com/shopandcompare/#calculator, which enables consumers to look at plans and products in their area and to get a preliminary estimate of costs and premium assistance.

Covered California is the state’s marketplace for the federal Patient Protection and Affordable Care Act. Covered California helps individuals determine whether they are eligible for premium assistance that is available on a sliding-scale basis to reduce insurance costs or whether they are eligible for low-cost or no-cost Medi-Cal. Small businesses can purchase competitively priced health insurance plans and offer their employees the ability to choose from an array of plans and may qualify for federal tax credits.