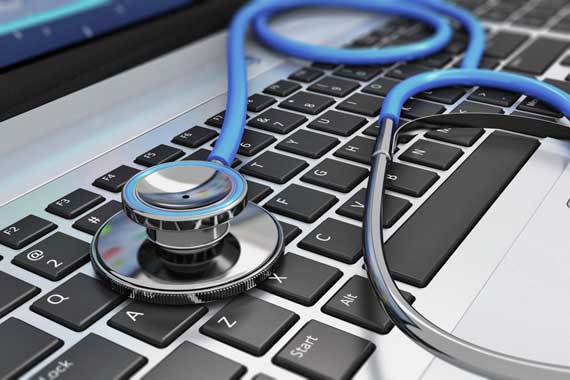 As of January 1, 2014, the Patient Protection and Affordable Care Act (PPACA) requires most U.S. citizens and lawful residents to either have “minimum essential coverage” or to pay a federal tax. The PPACA also requires each state to have a “Health Insurance Marketplace” (formerly called an Exchange) where individuals and small employers can purchase health insurance policies. People who have health coverage through employment or through a government program (such as Medicare, Medicaid or others) are not required to buy insurance in a Marketplace. This article explains Marketplaces provisions of the PPACA, and how they affect employers and individuals.

Q1. What exactly is a Marketplace?

A Health Insurance Marketplace (formerly called an Exchange) is a virtual marketplace where “qualified individuals” or “small” employers can compare and purchase health insurance policies (called “qualified health plans” or QHPs), either online or by calling in to a customer service center.  January 1, 2014 is the earliest date coverage will be effective if purchased in a Marketplace.  There are two types of Marketplaces:

States can operate the two types of Marketplaces separately, or they can elect to combine them into one Marketplace.  See Q/As 6 through 8 for additional details on the individual and SHOP Marketplaces.

Q2. What’s the difference between a State and Federal Marketplace, and why do different states have different types of Marketplaces?

The following map shows what type of Marketplace each state has elected to have in 2014. 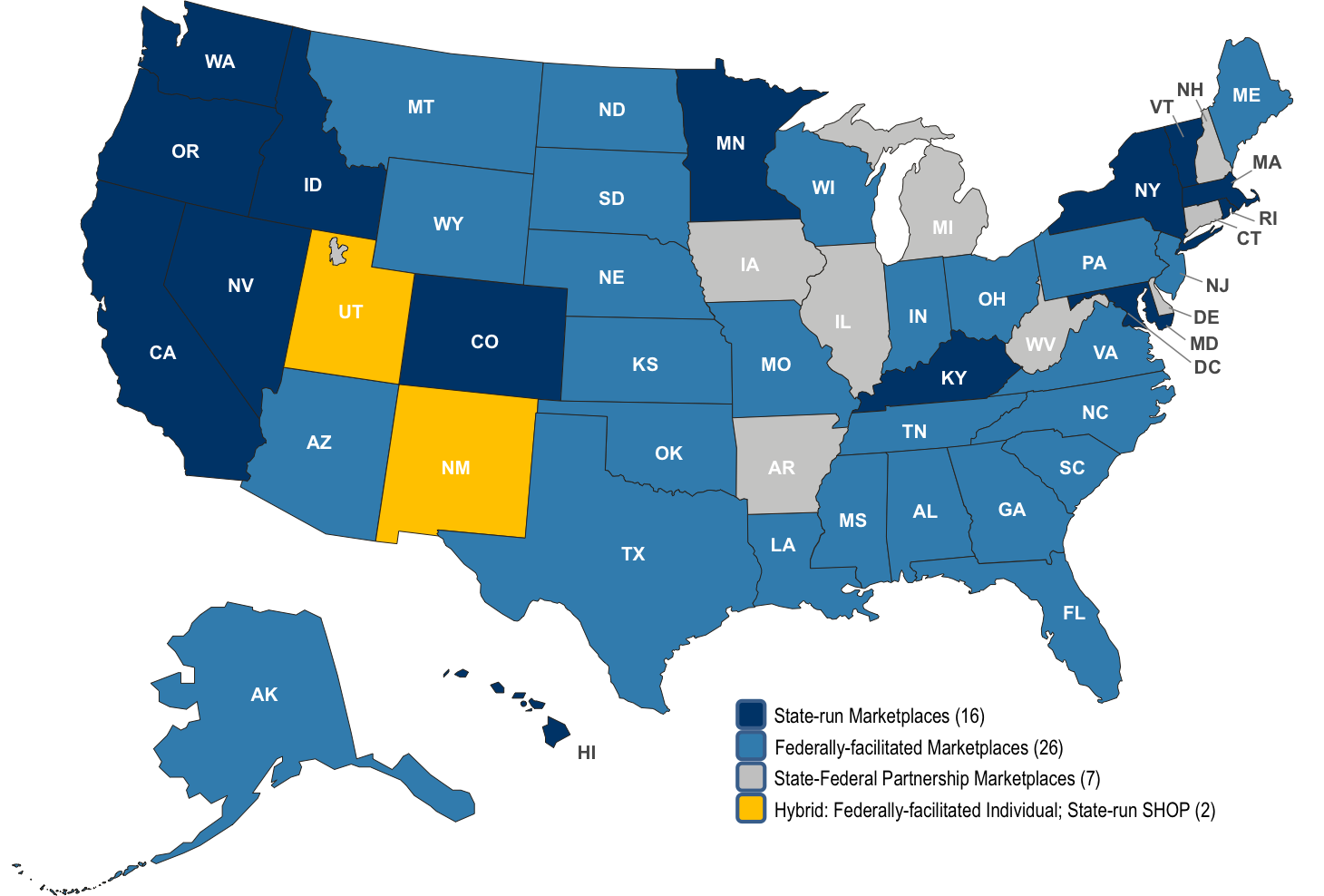 The URL of the Federal Marketplace web site is: https://www.healthcare.gov/

To obtain the URLs of the various state-run Marketplaces, go to: https://www.healthcare.gov/what-is-the-marketplace-in-my-state

Q3.  What is the timeline for open enrollment in a Marketplace policy and what is the effective date of coverage?

Open enrollment begins October 1, 2013, in both the Individual and SHOP Marketplaces, whether state-run, federally-facilitated, or some combination of both.  Coverage will not be effective until January 1, 2014, for individuals who enroll by December 13, 2013.  In the Individual Marketplace, the initial open enrollment period will be October 1, 2013 to March 31, 2014.  After 2014, open enrollment will be limited to October 15 through December 7 of each year. Outside of open enrollment, individuals generally will not be able to enroll mid-year unless they have a “special enrollment” event, defined the same as under current law for group health plans (e.g., marriage, divorce, new dependent, loss of other employment-based coverage).  In contrast, the SHOP Marketplaces will have “rolling” open enrollment periods—usually the first of each month or each quarter—based on the date the employer starts offering coverage through the Marketplace.

Q4.  Will all health insurance only be available through Marketplaces beginning in 2014?

No, individuals and employers will be able to purchase health insurance either inside or outside the Marketplaces, and employers who wish to will still be able to self-insure their group health plans.  Additionally, government health coverage such as Medicare, Medicaid, Tri-Care and others will continue to be available to qualified individuals.

However, all non-grandfathered* individual and small group insurance policies, whether sold in or outside the Marketplaces, must be “qualified health plans” (QHPs) that meet specified actuarial values, provide “essential health benefits” and meet other specified requirements including adjusted community rating.

Specified Actuarial Values:  QHPs must meet specified actuarial values, often referred to as “metals” levels because they are:  bronze (60% actuarial value), silver (70%), gold (80%) and platinum (90%).  These values must be met plus or minus 2%; meaning, for example, that the 70% silver level can provide an actuarial value of 68-72% but cannot go beyond these parameters.

Actuarial value is a measure of the plan’s generosity.  It is the percentage of the overall cost or value of covered benefits that is paid by the plan (or insurer) rather than by the participant.  For example, in a silver level plan, the plan or insurer would pay, on average, 70% of the cost, and the participant would pay 30%.  The participant’s share is paid through “cost-sharing” such as deductibles, co-pays, coinsurance and other out-of-pocket amounts, but does not include amounts paid for premiums.

Essential Health Benefits (EHBs):  EHBs—listed below—are 10 core health benefits items and services the Institute of Medicine (IOM) and the federal government have determined all individual and small group health insurance policies should provide.  Most large group health plans already provided at least eight or nine of these 10 services (many did not include pediatric dental or vision, or habilitative care).

Limits on Deductibles and Out-of-Pocket Maximums:

Risk Adjustment Factors:  Beginning in 2014, carriers may set premium rates in the individual and small group market based only on four factors (three in California).  This is referred to as “Adjusted Community Rating” or “Fair Health Insurance Premiums.  The allowable factors are:

Health insurers may no longer use other risk adjustment factors to set premium rates.  In the past, carriers used factors such as gender, pre-existing conditions, health status, claims history, duration of coverage, occupation and small employer size

Remember, only individual and small group insurance policies are required to meet specified actuarial values, to provide essential health benefits and limit deductibles, and to use only specified rating factors.  All plans must provide at least 60% actuarial value and must comply with the above limit on out-of-pocket maximums.

Q6.  What employers can purchase coverage in a SHOP Marketplace?

In 2014-2016, only “small” employers can purchase coverage in the SHOP Marketplace.

In 2017 and beyond, states can elect to allow employers of any size to purchase coverage in the SHOP Marketplace.

Q7.  Why would an employer want to purchase or offer coverage in the SHOP Marketplace rather than outside the Marketplace?

Another reason some employers might want to offer their employees coverage through the SHOP Marketplace is to allow their employees to each select their own carrier, plan and network.  Feedback from certain employers who have already purchased in the Utah SHOP Marketplace (Utah’s SHOP Marketplace is called Avenue H, and it is already open), suggests that employees are happier with their plans, and make fewer complaints about health coverage to their employer, because they’ve selected a plan and network that best fits their individual needs rather than a one-plan-fits-all approach.  This potentially creates a higher employee satisfaction level and higher employee retention rates.

Additionally, in some state Marketplaces (such as Covered California and Avenue H in Utah), an employer will be able to pay at least a specified percentage of employee coverage (in Utah’s Avenue H, a flat dollar amount and not a percentage may be selected) and allow employees to select which level health insurance plan they want in the Marketplace.  This option should be available in all State and Federal SHOP Marketplaces in 2015, but for 2014 it will not be offered in the federal Marketplaces, and each state Marketplace can elect whether or not to offer this option.

First, any U.S. resident can purchase health insurance in an Individual Marketplace, but only “qualified individuals” will be eligible for a subsidy.

Another reason many individuals may want to purchase health insurance in a Marketplace in 2014 and beyond is that people with household incomes between 100%-400% of the federal poverty level (FPL) will be eligible for federal subsidies, if they are not eligible for government health benefits (such as Medicare, Medicaid, SCHIP, Tri-Care or others) or for “affordable” employer-provided coverage that provides at least “minimum value” (defined as 60% actuarial value).   The two types of federal subsidies are the advance premium tax credit (APTC or just PTC), and the cost-sharing reduction.