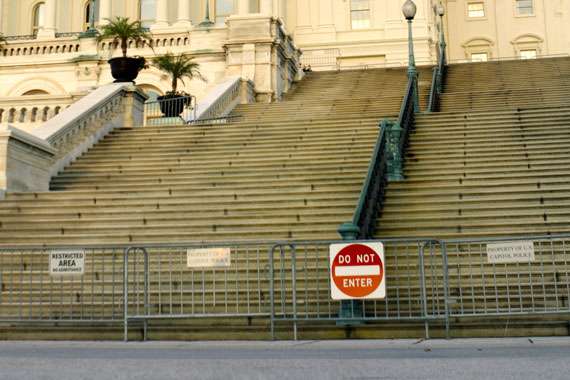 Reproduced with permission of Zywave

The U.S. Constitution requires Congress to pass a bill establishing a federal budget, often called a spending bill. For a spending bill to pass, the Senate and the House of Representatives must all agree upon the bill, which must then be approved by the President. When Congress is unable to agree upon a federal budget, or when the President vetoes it, before the budget cycle ends, a government shutdown occurs.

Due to Congress’ inability to reach an agreement on a spending bill, a government shutdown began on Oct. 1, 2013, following the end of the federal government’s fiscal year. Although the Republican-controlled House of Representatives has passed a spending bill that maintains spending levels, the bill does not provide funding to implement the Affordable Care Act (ACA). The Democratic-controlled Senate has refused to take up any bill that does not fully fund the ACA.

What happens during a government shutdown?

Similar to a lockout in the private sector, during a government shutdown, the government stops providing all “non-essential” services. This means that many government functions will stop, and many federal employees will be furloughed.

Which government agencies are affected?

Nearly all federal agencies will be affected by the government shutdown in some way. The Administration’s Office of Management and Budget has detailed contingency plans that describe each agency’s course of action.

The government estimates that roughly 800,000 federal workers will be furloughed as a result of the government shutdown.

Department of Health and Human Services

HHS said that a government shutdown could mean furloughing 40,512 workers, amounting to 52 percent of HHS employees.

However, the effect that the shutdown will have on each office will vary based on whether the service is essential. For example, those running the Suicide Prevention Lifeline would stay, but those in charge of investigating Medicare fraud would be furloughed. In addition, some parts of HHS will only be partially shut down.

Nearly 90 percent of the IRS’ workforce, or 86,200 workers, are expected to be furloughed. Although Social Security benefit payments, automated revenue collections and daily cash management for the federal government will continue, the IRS will stop performing key functions, including audits, examinations of returns, processing of paper returns and call-center operations for taxpayers with questions.

Certain essential employees, such as law enforcement, will not be furloughed, along with some positions that are paid for by funds outside of Congressional appropriations.

How does the government shutdown impact the ACA?

Although the Exchanges are operational despite the government shutdown, technical difficulties may still occur due to a high volume of traffic. When attempting to access Exchange websites on Oct. 1, consumers experienced wait times, glitches and error messages indicating heavy Internet traffic.

IT contractors are currently working to fix the issues. However, the shutdown affects non-essential government workers, which may include some of the IT staff.