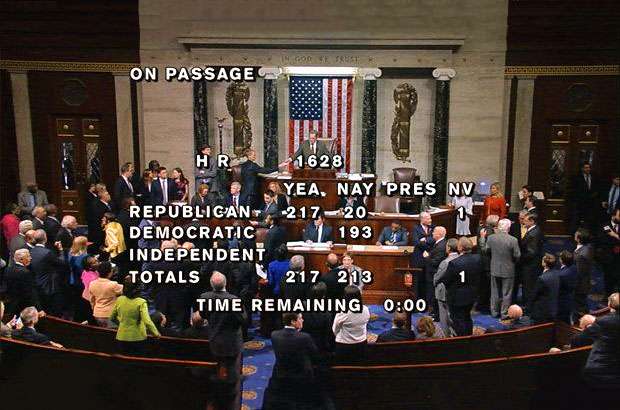 Shortly after 2 pm today (Thursday, May 4, 2017), the House voted in favor of the GOP bill to repeal and replace Obamacare. This bill is the American Health Care Act (AHCA), HR 1628.  The vote was 217 for, 213 against.  Republicans needed at least 216 votes to repeal Obamacare.  All the Democrats voted against the bill, as did 20 Republicans.  The bill now goes to the Senate, where it is almost certain to be amended and sent back to the House.  The AHCA does not become law until both houses of Congress pass the same bill, and that bill is signed by the President.

Click here for a Leavitt Group article on the recent history of the GOP repeal bill and amendments to it that convinced enough Republican holdouts to change their votes from No to Yes. The major sticking point was whether the AHCA would provide sufficient coverage for individuals with pre-existing conditions.  The Upton amendment (yesterday) provides an additional $8 billion over five years to cover health care costs and/or premiums for these individuals.  The Upton Amendment was needed because one of the changes in the MacArthur amendment (mid-April) is that states can obtain 10-year waivers to allow insurers in the individual market to underwrite (and increase rates for) individuals who had a gap in coverage of more than 63 days during the past 12 months.  The MacArthur amendment also allows states to obtain waivers for two other purposes:  1) to permit age-based premium rates (in the individual and small group markets) higher than the 5:1 ratio otherwise allowed under the AHCA;  2) to define their own (state-specific) “essential health benefit” requirements for coverage in the individual and small group markets.

Some of the major changes the AHCA makes to the Affordable Care Act (ACA) are: