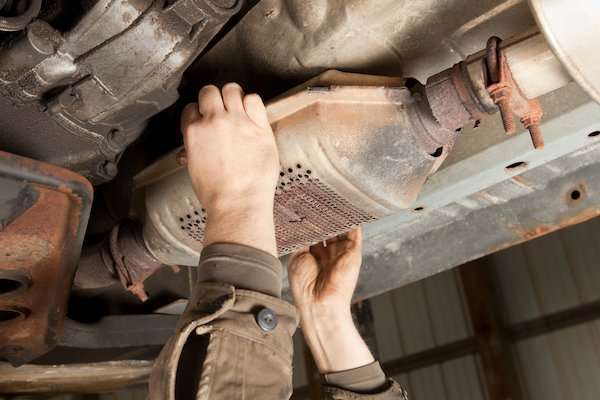 Stories about catalytic converter theft have been all over the news as reports have recently skyrocketed — yes, I do mean skyrocketed.

According to the National Insurance Crime Bureau (NICB), fewer than 1,300 such thefts were reported in 2018. This number jumped to more than 14,000 in 2020. The madness doesn’t stop there either. In 2021, thefts have only continued to increase.

In the first five months of 2021, there were 26,929 reports of stolen catalytic converters across the nation.

What is a catalytic converter? What does it do?

If you’re not a car person, you probably don’t know what the catalytic converter does. That’s okay! Many people don’t.

Catalytic converters are found in the undercarriage of cars, between the engine and the muffler. They are part of the exhaust system and help convert hazardous exhaust chemicals to safer and less harmful gases.

This chemical change happens because of a few precious metals inside the converter: platinum, palladium, and rhodium. The precious metal molecules are a catalyst for the chemical conversion.

Why are catalytic converters being stolen?

The precious metals inside catalytic converters are considered “precious” for a reason. Platinum and rhodium are two of the most desperately needed metals worldwide. However, they’re very scarce, with platinum being about 30 times rarer than gold.

These metals are in high demand because they are used in electronics, oxygen sensors, computer chips, medical equipment, etc. Clearly, there’s a demand. However, their scarcity has turned people to alternative modes of sourcing.

Some of the most targeted cars are:

How can I prevent my catalytic converter from being stolen?

You can even take things a step further by:

What should I do if my catalytic converter is stolen?