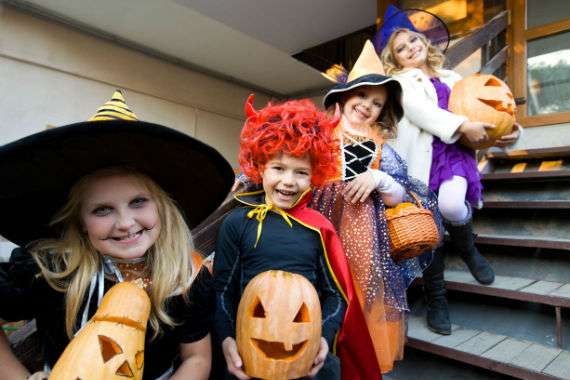 Halloween is rapidly approaching, which means it’s time for another fun-filled season of Halloween misinformation.

Every year, it seems news outlets and social media memes warn us all about the supposed dangers of Halloween candy. We hear about needles, razor blades, and poison supposedly given out by evil strangers to children. Luckily, almost all of these stories are pure fiction. But unfortunately, the urban legend has become so entrenched in our public consciousness that many people believe them without question. (Snopes.com, one of the best sites around for debunking rumors and legends, covers Halloween legends here and here.)

That said, Halloween isn’t without its dangers. The biggest threats, according to experts, include pumpkin-carving injuries and auto-pedestrian accidents.

According to a study published in the medical journal Pediatrics, some of the most common accidents on Halloween are hand and finger injuries. Hand surgeon Stuart J. Elkowitz, M.D., notes that most such accidents “are stab wounds to the fingers and palm.” The index finger, according to Dr. Elkowitz, is the finger most often damaged—often resulting in injuries to critical tendons, nerves, or arteries. A corroborating study conducted by Journal of the American Academy of Pediatrics found that 18 percent of emergency room injuries on Halloween involved the finger and hand and that a large proportion of those were related to pumpkin carving.

Apparently, nothing says “Halloween” like slimy kitchen knives and trips to the emergency room. Here are a few tips to keep your pumpkin carvers safe:

Parents Should Carve for Kids. According to the Pediatrics study, most knife injuries happen to children between the ages of 10 and 14. Experts suggest that pre-teens and early teens should probably not be carving with kitchen knives. One solution is to have your child do everything but cut: come up with a design, draw it on the pumpkin with a marker, and scoop out the seeds. Another option is to use safer tools. (See below.)

Special Tools Save Fingers. Those pumpkin-carving tool kits you’ve seen in department stores? They actually work—and they help prevent injuries. The tools have been designed with safety in mind (seriously—do you think they want a bunch of lawsuits from the parents of children with missing fingers?), and unlike traditional carving tools, they’re sized for smaller hands. If your children insist on carving their own jack-o’-lanterns, skip the knife block and provide safer utensils.

Carve First, Empty Second. According to Dr. Elkowitz, removing the pumpkin top and emptying the seeds first encourages children and adults alike to put their hands inside the pumpkin to stabilize it as they carve. This leads to puncture wounds when knives over-penetrate. Leaving the pumpkin’s top on until the face is complete can help prevent this from happening.

Follow Safe Carving Tips. Pumpkin guts are slimy and can make tools slimy, too. A slippery knife is a recipe for disaster. Make sure everyone doing any carving has adequate room and plenty of light. In addition, ensure that everybody keeps their hands clean and dry. If knives or tools start to get slimy, make sure to wash and thoroughly dry hands, utensils, and the outside of the pumpkin before continuing carving.

Interestingly, the Journal of the American Academy of Pediatrics report also noted that “a much higher proportion of injuries that occurred on Halloween were associated with sports, including football and basketball, than with knives.”

After a study of 21 years’ worth of accident records conducted by researcher Bert Sperling, Halloween was dubbed the “deadliest day of the year” for auto-pedestrian accidents involving children. Sterling’s research indicated an average of 5.5 children killed in the United States every year in Halloween-related car accidents. This contrasts sharply with 2.6 fatalities for every other day of the year. Nearly a quarter of accidents happened during the “most dangerous hour” of 6:00 and 7:00 p.m., and young drivers (those between the ages of 15 and 25 years old) accounted for almost a third of all fatal child pedestrian fatalities on Halloween.

Guide Little Ghosts and Goblins. It goes without saying that smaller children should be accompanied by a parent or guardian when trick-or-treating. Even older children should never trick-or-treat alone. Send the older kids out in groups, set clear rules for them to follow, and make sure at least one of the kids has a cell phone just in case.

Costume and Prop Safety. Think in terms of safety as you plan your costumes. When possible, costumes should be bright and visible. Masks are fun, but they can limit a child’s vision. Use makeup or face paint instead—or at the very least, remove masks when traveling from house to house. If a costume trails on the ground, it can be a tripping hazard. And if your knight or pirate is carrying a sword or dagger, make sure the prop isn’t dangerously sharp.

Stay Away from the Dark. One of the biggest dangers for kids who are trick-or-treating is visibility. Take your kids only down well-lit streets. A flashlight, glow-in-the-dark bucket, or other lighted device can help make sure drivers can clearly see you and your children.

One big Halloween concern for many parents is danger of fire. But the fact is, according to Dr. John Hall of the National Fire Protection Association, “there is no localized spike in reported fire injuries around Halloween.” Normal precautions still apply, however. Be sure to light candles only in well-ventilated spaces, and never leave a burning candle unattended.

Just because the dangers of Halloween candy are overblown doesn’t mean you shouldn’t take a moment to go through your children’s goodies before they begin eating. It’s crucial that you take advantage of this time to claim some of your own favorite candies for yourself, then you can finally clear the kids for a little Halloween-night binge eating.

Have a happy and safe Halloween!