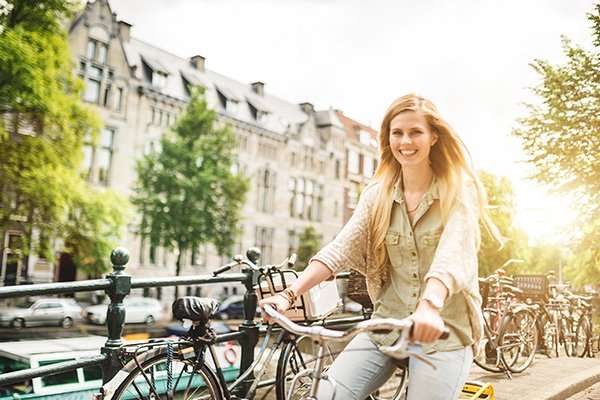 A typical scene on Amsterdam’s streets includes countless cyclists heading to or from work, transporting young children to school, or carrying anything from groceries to house pets. On any given working day between 8 and 9 in the morning, there are almost two million bikes on Dutch roads!

Most tourists are shocked by the vast number of bicycles and the wide variety of cyclists, from students to police officers and couriers. Cycling seems to be the most popular and most efficient mode of transportation for many of Amsterdam’s citizens.

The Netherlands has a population of 17 million people, and about a quarter of those people cycle every day. In fact, there are more bikes than people with nearly twenty-three million bikes or about one and a half bikes per person.

There was a time when cyclists were under severe threat of being expelled from Dutch cities by the growing number of cars. In 1971 alone, more than 3,000 people were killed by cars, 450 of them being children. Many gathered to fight for a better way and build an alternative infrastructure.

Amsterdam has found a way to make bicycling easy, convenient, fun, and safe. They have equipped the city with an elaborate network of cycle paths and lanes, totaling almost 250 miles. Dedicated bike lanes have been created on major streets, parks, and side streets. Bike racks are readily available, and there are even dedicated parking garages for bikes. It’s no wonder Amsterdam has become the biking capital of the world.

The benefits of cycling are countless. Cycling reduces carbon emissions, improves air quality, and reduces noise levels. Cycling also provides a multitude of health benefits, helps save money otherwise spent on gas and parking, and connects individuals to their environment.

Staying Safe and Protecting Your Bicycle

Biking to work may not be a practical possibility, but even cycling around the neighborhood has its advantages. Cycling can be a fun family hobby and provide memories for years to come. Here are a few tips for staying safe and protecting your bicycle.

Movement of the Month: Aim to do some form of cycling twice each week for the month of April by pulling that dusty bike from the garage and taking it for a spin. Make cycling a family activity and invite friends to try out a cycle class at a local community center or cycle studio.