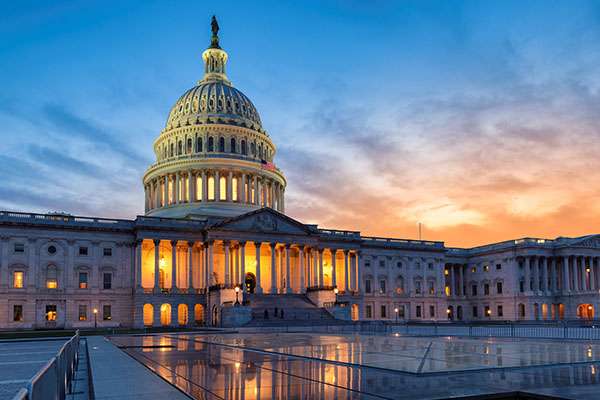 Much of the Biden agenda rode on whether the democrats would control both the House and Senate. With a win by blue in the Georgia run-off elections on January 5th, Biden is headed for what should be smooth sailing in his row towards some ambitious legislative initiatives.

Even with the democrats holding 50 seats in the Senate, making Vice President-elect Kamala Harris a tiebreaker, no doubt in favor of the Biden/democratic cause, some initiatives require more than just a simple majority vote. This article will walk through the Biden initiatives and the agenda’s effects on the world of employee benefits and address likelihood of movement on each initiative based upon the razor thin democratic majority makeup of Congress.

First on the agenda, Biden seeks to have his cabinet secretaries confirmed to shift the political direction in Washington.

The Trump administration interpretive guidance and executive orders will likely see revamping or reversing in short order. Employers concerned about a drastic change in requirements should know any change requires advance notice before the government can reasonably expect compliance. Additionally, concerns often stated about progressive policies of the Biden-Harris team can . . . shall we say . . . contain alternative facts or are misinterpreted.

This article will iron out the creases of misinformation and highlight any policies that may affect the interested parties in the insurance realm, whether consumers, agents, employers, or plan sponsors.

Biden supports an initiative to provide qualified Americans a $2,000 stimulus check. His latest proposal included $1,400 to add to the $600 already passed into law a couple of weeks ago under the Trump administration. The economic assistance has wide, bipartisan support. The package would include expanded unemployment benefits and aid for state and local governments struggling to provide COVID-19 services in their respective regions, while suffering from losses in taxes and revenue. Additional relief for small businesses is also expected to be included in the Biden economic package.

The 12-seat democrat advantage in the House (less than a 2/3rd majority), as well as moderates in his party, may reduce the ability for some of Biden’s more expensive and progressive policies to become law. This includes the following discussed agenda favorites of the Biden administration.

Now, adversaries of the ACA say the ACA cannot stand without the individual mandate, and that the entirety of the ACA should be thrown out. All the while, Biden plans to double-down on the ACA. The SCOTUS decision will not be released until spring 2021, but ahead of that, the Biden administration may move to make that SCOTUS case moot (i.e., no longer relevant) by enacting legislation that will change the reasoning behind the ACA unconstitutionality argument (such as modifying the law so that the cost of health insurance is not more than if ACA did not penalize for not having the appropriate level of health insurance or by changing the issue of enforcement authorities).

Biden would open the availability of the PTC, regardless of income (likely on a sliding scale). Other favored proposals include:

Biden has proposed that ACA Exchange Marketplace coverage be available to individuals offered employer coverage. What limitations to that may be built out (i.e., is eligibility based on income or affordability thresholds), is yet unknown. This provision is not yet likely to pass without important caveats and corresponding rules to prevent employer penalty for employees accessing Exchange Marketplace coverage.

Biden’s healthcare plan would cost approximately $750 billion over the next ten years; paid for by repealing the Trump era tax cuts for the top tax rate.

The Biden proposal to lower Medicare eligibility to age 60 also split the democratic party in the recent primary election, making passage of such a policy less likely. A closely split Congress, plus initiatives that will cost taxpayers money, add up to sum zero.

Any initiative to lower the Medicare eligibility rules would likely result in older employees opting out of the employer plan. But I wouldn’t bet on it. In most cases, the employer plan is the superior plan. Leaving employer plans with an advantage over a public Medicare option that requires gap, supplemental, and other add-on coverage that most employer plans include in one group health plan package.

On the bright side, Medicare and older employees tend to be costlier. Meaning, any transfer of costly participants to a government plan will help the plans’ bottom line.

Biden intends to expand ACA, which includes an employer mandate to offer Minimum Essential Coverage (MEC) to full-time employees and their dependents and spouses (and it must be affordable, based on the employee-only premium).

Because of the mandate to have employers offer qualified coverage to employees, it is unlikely a Biden policy would dampen the employee benefits world. Even if a Medicare buy-up option was available, this option would be offered in addition to the ACA mandates and infrastructure already ingrained in the employer and group health plan markets.

Even with a public option, the ACA’s employer mandate will continue to drive business to group health insurance markets.

Additionally, for reasons other than government mandates, employers have been offering, and typically MEC, even without application of a mandate. Whether recruiting, retention, employee satisfaction or part of an overall compensation plan, employers will continue to need a broker partner like Leavitt Group to assist them in navigating the ACA and insurance markets, more so under a Biden administration than a Trump administration ; who for 4 years, attempted to, and in some cases, succeeded in, watering down, defunding, and overturning ACA provisions. The very ones Biden adamantly supports.

What is Budget Reconciliation?

Instituting a public option faces battles even within the democratic party. The Budget Reconciliation Process is not an available constitutional process that can be used to sign into law new rules that would not require budget appropriations. This way of instituting new law by a new administration without Congress via executive order or reconciliation with a simple majority in Congress is the only way such a progressive policy could become law in a closely split Congressional session.

Any public option competing with a more costly private option will have effects on insurers and employers where adverse selection results in the younger and healthier population choosing the less expensive coverage option. It would be welcome, and may be likely, that rules will be written to offset such complications. No doubt, any movement to implement a public option will result in higher premiums and cost of coverage resulting from the increased and unknown risk.

While this could be seen as weakening the employee benefits market, with rulemaking, it is not uncommon for regulators to consider impact to existing infrastructure in promulgating the specifics in the rule.

Specific questions that can be expected in sub-regulatory guidance include:

Can employer plans and public options directly compete, or, similar to the existing structure, will employees be prevented from qualifying for a public option where an affordable employer plan is offered? Biden has stated to the affirmative. However, would a negotiation on this provision result in a compromise on access to the public options? It is likely.

What Happens After Removing the ACA Firewall of Affordability Access to the Exchange Insurance Marketplace?

Some may argue removing the ACA firewall of affordability for access to the Exchange Marketplace will result in a mass exodus of employees from employer sponsored group health plans. However, long before ACA, employers offered affordable coverage to employees and employees chose to elect that coverage . . . all without a threat of penalty looming over them. Any prediction of a mass exodus does not bear weight if history is any indication.

If a public option is opened up, the ACA employer mandate would require modification to the subsidy eligibility and affordability thresholds and corresponding rules.

Even men who differ greatly agree on this health policy – end surprise medical billing and reduce the cost of prescription drug prices. How they would go about that differs. Biden favors that the federal government negotiate drug prices on behalf of Medicare beneficiaries.

Passed as part of the Emergency COVID Relief Act of 2020 package that passed a Republican-controlled Senate and President Trump, the surprise medical billing law called No Surprises Act, takes a first step in eliminating or reducing emergency Out-Of-Network (OON) billing. This initiative is a favorite of the Biden team as well.

An administration filled with alternative interpretations of existing law and ever-changing rules, the Department of Labor leadership will no doubt shape the everyday life of employers during the Biden administration, and in years to come.

Biden nominated Boston Mayor Martin Walsh to head the Department of Labor. A departure from the Trump administration’s leadership, Eugene Scalia, a supporter of policies benefiting employers and corporations, new leadership at the DOL under Biden will no doubt result in many changes to business. Walsh was backed by labor unions, a sign that Biden intends to focus more on employee rights. Biden will revive the Occupational Safety and Health Administration, the arm of the DOL charged with workplace safety. This arm was often deemed painfully missing or inadequate during the recent and ongoing COVID-19 crisis.

Any orders and regulations intended to undermine or water down the ACA will likely see executive orders reversing them. For example:

It is not known yet whether Biden intends to revisit the 2019 tri-agency final regulations that permitted Health Reimbursement Arrangements to be offered for purposes of paying for individual coverage or other expanded purposes.

Additionally, In October 2020, the tri-agencies released a final rule requiring consumer price transparency with new disclosures phased in between 2022 and 2024.

Now that democrats have secured a simple majority in Congress after a blue win in Georgia, Biden’s legislative agenda now includes a higher expectation of turning intent into the law of the land. Due to the lack of 2/3rds vote, any of Biden’s efforts needing Congressional support are likely to be muted. Move too aggressively on an unpopular or progressive agenda and a Congress so closely divided could result in bills being blocked by moderates or filibuster.

The budget reconciliation rules state that passage under reconciliation is only permitted if the subject matter is directly related to raising revenue or expending funds. (In 2017, a Republican Congress could not meet the material substantive requirement to repeal and replace ACA). Any ACA budget or tax legislation will not be available through budget reconciliation

Biden’s long-term plan is to expand ACA. The foundation of his healthcare policy rests upon that concrete slab of ACA. Expansions of ACA that include premium tax credit expansions, cost sharing subsidies expansions, or a public option are unlikely to pass with a thin majority in the Senate; regardless of the fact that Georgia turned blue.

Be sure to partner with Leavitt Group as we continue to analyze the law as it happens. Subscribe to the Leavitt Group news site at news.leavitt.com.

This information is not intended or provided as legal advice and is educational in nature. Consult your attorney for compliance with law applicable to your specific circumstances.