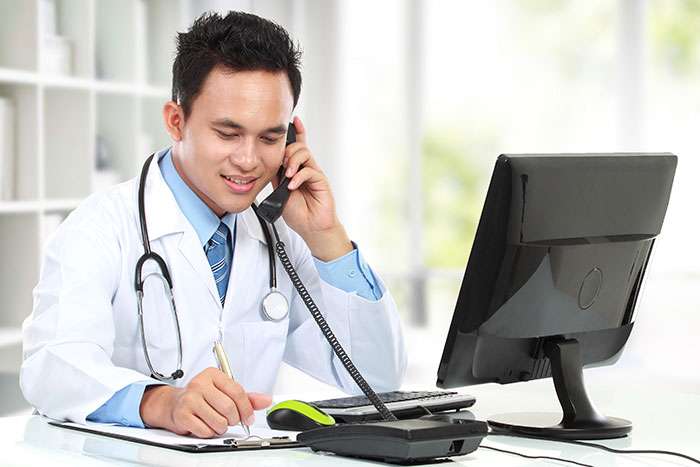 [This article was updated Aug. 24 to clarify that the caveat applies to stand-alone telemedicine benefits, not to those that are offered by the insurer as part of an insured health plan.]

Telemedicine allows a patient to have a “virtual” visit with a board-certified doctor via telephone or videoconference regarding a particular health issue.  The doctor uses electronic health records to diagnose, treat, and write prescriptions when necessary.  Although medical services are provided virtually rather than by an in-person office visit, a telemedicine visit is a “real” physician visit, and it involves diagnosis and treatment of a medical condition.  It is not just preventive care or a nurse helpline.

Spoiler alert: The answer to the question this article addresses is that a stand-alone telemedicine benefit might affect H.S.A. eligibility, for reasons detailed below.

An increasing number of employers are offering telemedicine or telehealth benefits to their employees — either as a stand-alone benefit (such as Teladoc®) or as an embedded benefit offered by their health insurance carrier.    The benefits of such a program are that it can save employees and employers money, allow individuals to access needed medical care quickly and easily, and incent employees to access appropriate levels of care (e.g., virtual office visits rather than emergency room visits).

One caveat:  Employers who offer high-deductible health plans (HDHPs) and health savings accounts (HSAs) should be aware of a potential issue if they also implement a stand-alone telemedicine benefit, especially one with a zero or low co-pay:  it is possible that having a stand-alone telemedicine benefit available will render an individual ineligible to make or receive an HSA contribution.  The reasons for this are explained below.  The IRS is aware of this conflict and has not issued guidance on it.  We spoke with IRS officials in Washington, D.C., earlier this year, and they said informally that any guidance would likely be issued prospectively.

Leavitt is providing this article because we want our clients to understand the issue and possible risk of offering a telehealth benefit on a stand-alone basis versus from the health insurer.  We believe the risk is small, but you should have your legal counsel review this article and follow their legal advice.

The reason participation in a stand-alone telemedicine plan might affect HSA eligibility is because IRC Section 223(c)(1) provides that an individual in a HDHP is eligible to make (or have made on his/her behalf) an HSA contribution only for those months in which the individual:

Additionally, to be eligible for an HSA contribution, an individual cannot be entitled to Medicare and cannot be claimed as a dependent on someone else’s tax return for that year.

The potential issue when an individual is covered under both an H.S.A. and a stand-alone telemedicine benefit is the second bullet point above.   The rationale behind the HDHP/ HSA combination is to hold down costs by making the enrollee financially responsible until the (high) deductible is met, but also to provide the HSA as a vehicle to which the enrollee (and employer) can contribute to fund those pre-deductible expenses.  The stand-alone telemedicine benefit could be construed as undermining the rationale behind HDHPs and providing a non-allowable benefit, particularly if there is a zero or very low co-payment (such as $5 or $10).  It is possible the IRS could issue future guidance saying that telehealth coverage is another health plan and that a low- or no-cost telehealth virtual visit is essentially providing a paid or subsidized benefit before the deductible is met, and that the $5 or zero co-pay is really paid for by the aggregate premiums paid by or for all telehealth enrollees.

On the other hand, it is also possible that Congress could pass legislation amending Code section 223 and explicitly stating that telemedicine is a limited benefit or is “permitted insurance” for HSA eligibility.  Such legislation would likely require a “fair market value” co-pay, which is why many insurers who include telemedicine as part of their high-deductible group health plan also impose a $30 or $40 co-pay.

The first thing an employer should do when it decides to implement a stand-alone telehealth benefit—if the employer also offers a HDHP and HSA—is to take steps to show that it considers the telehealth benefit to be part of the group health plan. The practical problem may be that the carrier or TPA will not include such language in the health plan document and summary plan description and/or will not count participant co-pays for telehealth services toward the plan deductible. However, the employer should state in its wrap document or wrap SPD that the telehealth benefit is part of the group health plan and should include evidence of it in the health plan’s form 5500 filings.  This should be done now, even though no IRS guidance has been issued yet.

If Congress enacts legislation allowing individuals to have stand-alone telemedicine benefits and to participate in an HSA, employers must follow whatever conditions (if any) the new law requires.

If the IRS says that a telehealth plan or option is a separate “plan” unless it is offered by the same carrier providing the group health plan coverage (for insured plans), then it won’t matter how much employees pay for a telehealth visit, the mere fact of having other plan coverage will render the individual ineligible for an HSA contribution.  Employers with insured HDHPs could then offer whatever telehealth benefits were available (if any) through the underlying carrier. Arguably this should not affect self-insured HDHPs, because the plan sponsor can include whatever benefit options it wants as part of its group health plan, but sponsors of self-insured plans should make sure the plan TPA counts the participants’ cost-sharing for telehealth toward the HDHP deductible. If the outside telehealth provider will not notify the TPA when a HDHP participant uses the telehealth service, the employer could notify participants in advance that their telehealth co-pay will count toward the deductible only if they notify the TPA and send evidence of their co-payment.

If the IRS issues guidance and an employer does not take appropriate action, the following consequences apply for an employee who has stand-alone telemedicine benefits that would disqualify the individual from HSA participation:

If you offer a HDHP and HSA to your employees, please review this article with your legal counsel before you implement a stand-alone telemedicine benefit.