Health Insurance Marketplaces (originally called Exchanges in the Affordable Care Act) are the centerpiece of the health care reform provisions that will be implemented in 2014.  Individuals and small businesses will be able to purchase health insurance in these Marketplaces, and in 2017, states may elect to allow large employers (as well as small employers) to purchase health insurance through these Marketplaces. For 2014, each State has already notified Health and Human Services (HHS) whether it will operate a state-based Marketplace (SBM), enter into a state-federal partnership Marketplace (SPM), or default to a federally-facilitated Marketplace (FFM).  The deadline to opt for a state-based marketplace was December 2012, but states had until February 15, 2013, to notify HHS if they were implementing a state-federal partnership model.  All other states either elected or were defaulted to an FFM.  All three types of marketplaces must be ready to begin enrolling consumers into coverage on October 1, 2013, and must be fully operational on January 1, 2014. Given that October 1 is less than four months away, states face serious challenges to making the necessary policy and implementation decisions.

Here’s the breakdown of state, partnership and federally-facilitated marketplaces, as of June 15, 2013.  States in each category are listed below, followed by a map showing the states’ decisions: 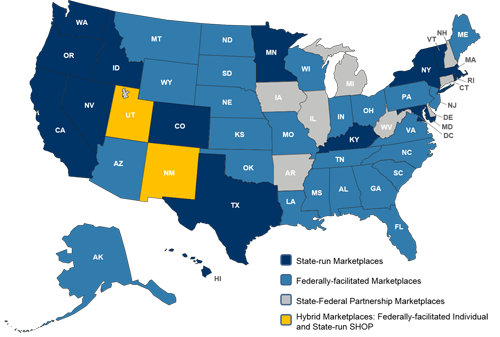