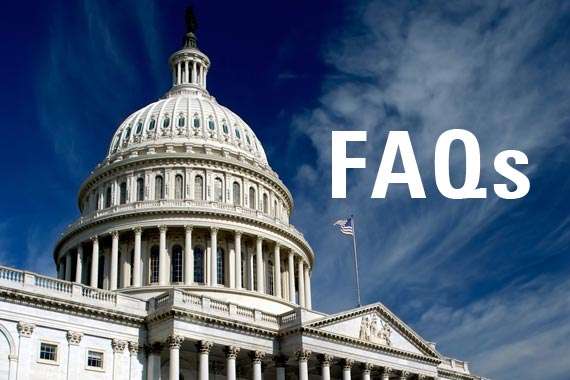 Frequently Asked Questions (FAQs) Part XIX were issued May 2, 2014 by the Departments of Labor (DOL), Health and Human Services (HHS), and the Treasury (the Departments). These FAQs address the following topics:

These and previously issued FAQs are available at http://www.dol.gov/ebsa/healthreform/ and http://www.cms.gov/cciio/resources/fact-sheets-andfaqs/index.html.

The following provides additional detail on the five topics listed above.

The new DOL model COBRA general notice and election notice are available at www.dol.gov/ebsa/cobra.html , and they have both been updated to include information about the availability of health coverage in the Marketplace/ Exchange as an alternative to COBRA continuation coverage.  They also note that such coverage may be less costly than COBRA.  Additionally, a newest model CHIPRA notice (dated January 31, 2014) is available at http://www.dol.gov/ebsa/compliance_assistance.html

Prior FAQs and other guidance have addressed what costs a plan can or must count toward the out-of-pocket amount. This is an important issue for both participant and plans, since the plan must pay 100% of eligible expenses once the out-of-pocket maximum is reached. Generally, amounts that must be counted include deductibles, co-pays and coinsurance for services provided in-network.  Numerous questions have arisen (and remain) about whether and how certain out-of-network expenses must or may be counted toward the out-of-pocket maximum.  This FAQ addresses several such circumstances.

Balance Billing:  Prior guidance (FAQs Part XVIII Q4) clarified that if a plan includes a network of providers, and a participant receives services from an out-of-network provider who charges more than the plan’s allowed amount, (a practice typically called “balance billing”), the plan may, but is not required to, count the participant’s out-of-pocket costs toward the plan’s annual out-of-pocket maximum.

Purchase of Brand Name Drugs When Generics are also Medically Appropriate:  Question 3 of the FAQs clarifies that if a participant purchases a brand name prescription drug, when a generic was available and medically appropriate (according to the participant’s doctor), a large group insured plan or a self-insured plan may provide that the annual out-of-pocket maximum does not include all or some of the amount paid by the participant or beneficiary (e.g., the difference between the cost of the brand name drug and the cost of the generic drug).  Question 3 specifically requires, however, that “for ERISA plans, the SPD must explain which covered benefits will not count towards an individual’s out-of-pocket maximum.”

The reason this applies for self-insured and large group insured plans (but not for small insured plans) is because they have discretion to define “essential health benefits” (EHBs) under ACA section 1302(a), but (non-grandfathered) individual and small group insured plans must provide coverage of the EHB package. Thus, for example, self-insured and large group plans could include in the definition of EHBs only generic drugs, if medically appropriate and available.  Participants could still purchase brand name drugs at a higher cost sharing amount, but some or all of the cost in excess of that of the generic drug would not count toward the annual out-of-pocket limit.

Reference-Based Pricing:  Until guidance is issued and effective, a large group market plan or self-insured group health plan that uses a reference-based pricing program may treat providers that accept the reference amount as the only in-network providers, provided the plan uses a reasonable method to ensure that it provides adequate access to quality providers.

The FAQ requests comments on how the out-of-pocket limit should be applied to reference based pricing. The Departments recognize that reference pricing is intended to encourage plans to negotiate cost effective treatments with high quality providers at reduced costs, but they also express concern that some plans or issuers may use such a pricing structure as a subterfuge to impose otherwise-prohibited limits on coverage, without ensuring access to quality care and an adequate network of providers.  Comments are due by August 1, 2014 and can be sent to E-OHPSCA-FAQ.ebsa@dol.gov.

Prior guidance allows plans to use reasonable medical management techniques to determine the frequency, method, treatment, or setting for a recommended preventive service, to the extent not specified in the recommendation or guideline regarding that preventive service.

Question 5 specifies that a group health plan or health insurance issuer will be considered in compliance with the preventive coverage requirements if it covers the following tobacco use counseling and interventions without cost-sharing:

This guidance is based on the Public Health Service-sponsored Clinical Practice Guideline, Treating Tobacco Use and Dependence: 2008 Update, available at: http://www.ahrq.gov/professionals/clinicians-providers/guidelinesrecommendations/tobacco/index.html#Clinic

Question 6 clarifies that a permissible carry over at the end of a health FSA plan year should not be taken into account when determining if the health FSA meets the definition of an “excepted” benefit.

Prior regulations defined excepted benefits and subsequent IRS guidance (October 31, 2013) allowed health FSAs to permit a carry over from one plan year to the next of up to $500 of unused amounts.  This FAQ (Question 6) clarifies that a health FSA will not cease to be an excepted benefit merely because it permits such a carry over.

A quick recap of the prior guidance on excepted benefits and health FSA carry over:

Summary of Benefits and Coverage

Until further guidance is issued, plans and issuers can continue to use the templates for Summaries of Benefits and Coverage (SBCs) that were issued in April 2013. These are available at http://cciio.cms.gov and http://www.dol.gov/ebsa/healthreform .  Additionally, there are no changes to the uniform glossary, the “Why This Matters” language for the SBC, or the Instructions for Completing the SBC.

Question 7 specifies that the following special rule continues to apply:   “to the extent a plan’s terms that are required to be described in the SBC template cannot reasonably be described in a manner consistent with the template and instructions, the plan or issuer must accurately describe the relevant plan terms while using its best efforts to do so in a manner that is still as consistent with the instructions and template format as reasonably possible.”

Question 8 provides that previously–issued enforcement and transition relief guidance also continues to apply, and the Departments will continue to emphasize assisting compliance—rather than imposing penalties—on plans and issuers who make a good-faith effort to comply.  Some of the other transition relief specifically listed includes: